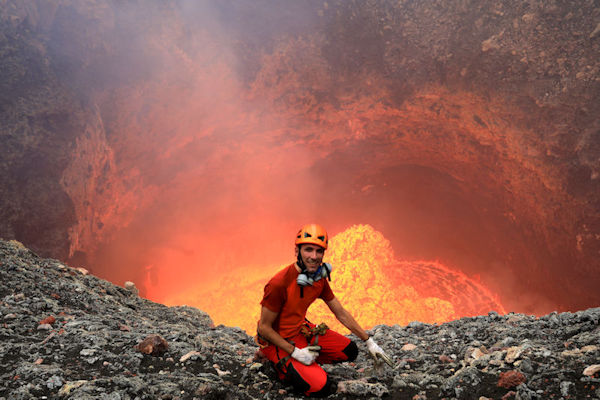 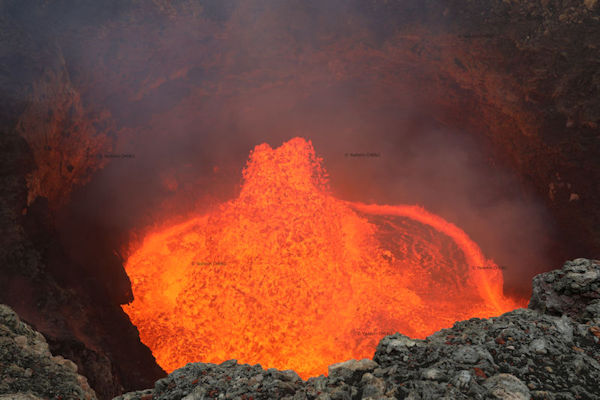 The active lava lake in Benbow's crater on Ambrym volcano in July 2018 (image: Yashmin Chebli / VolcanoDiscovery team)
Yashmin on the lower terrace above the lava lake of Benbow

The activity of Ambrym volcano remains intense with three active lava lakes in Benbow, Marum Membelesu and Niri Membelesu craters. Our expedition leader Yashmin Chebli was on the volcano last week and reports:
"...on Ambrym island, the volcanic activity is permanent and continuous. Since January, 2018, there has been a reactivation of the Niri Membelsu crater with powerful degassing. At present day, the lava lake is incandescent. The level of the lava lake of Marum went up and is subject to huge and persistent boiling of the lava lake caused by intense convection currents and gas bursting within the lava lake. ... permanent bubbling."
"During this expedition, we approached very closely the incandescent lava lake of Benbow, at 25 m over its surface. Its level of lava was slightly lower than last year, and its visible extent is 40 m x 30 m. Its intense thermal convection provokes important waves of incandescent lava which rush under the first terrace of the vent or which crash on the internal walls of the crater. A real show of immense fire with a powerful mixture of gases, very intense, and lava fountains rising to25 m to 30 m high."

Map of erupting volcanoes in the World

Info: to enlarge the map, please click above on the right of the map

The current news of the active volcanoes in the world

Our alive planet, The Earth gathers one large numbers of active volcanoes with various level of intensity of the eruptions. Other volcanoes sound in phase of passing activity or in rest. The purpose of this page of current events is to inform you in real time or as fast as possible about the activity of volcanoes in the world. The source of this multiple information is supplied thanks to the close collaboration with Volcano News which synthesizes all volcanologic news.